In the last few articles, I commented on why I adopted Neovim as my main editor and went through the basics for using the program. However, it does not come with plugins or nice looks by default. Here, I show you how I set up my Neovim.

The programming languages I use in my daily life are JavaScript (JSX and TypeScript), CSS, Sass and lately I'm studying Python, too. Therefore, my configuration supports these technologies. 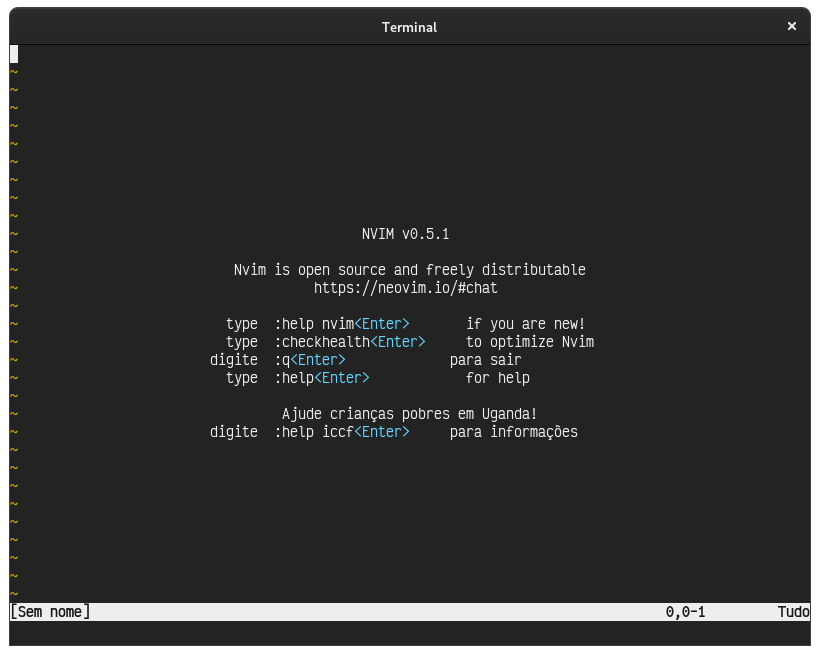 Neovim as is on first launch

About my choices for the configuration

As you can imagine, Neovim is configured by text files.

There are two ways to configure it: using the Lua language, or VimScript, created for Vim. Here I will use the last one, as it works for both Vim and Neovim. So I kill two birds with one stone.

I have no experience with Lua, and at the moment I have no plans on learning the language just to configure the application. I'm aware that there are more modern ways to do this, but I prefer to keep my settings concise.

At the end of this guide, you will not have a tangle of files and directories, as you may have seen elsewhere, but rather a single file, just enough for comfortable use.

As with most software, there is a way to edit options and preferences. These can be tested with the command :set <option-name>. Try opening an instance of Vim/Neovim now and type :set number, you'll notice that the line numbers will appear on the side. The problem with this is that these commands will have to be repeated each time you reopen the program.

To keep these settings saved, just write these commands in a file in your user folder. The name and location will vary depending on whether you use Vim or Neovim:

If these files/directories do not exist in your home folder, just create them manually. Remember that files starting with "." are hidden by default on Unix systems (Linux, BSDs and macOS). Make sure you are showing hidden files in your file manager or terminal.

Basic options in the configuration file

Before we get into more complex things like extensions and their settings, let's stick to the basics. There are many options to tinker with, however, the ones I put below are the ones I currently use. Note that in the file will have the commands that would have to be typed every time the editor opened.

Here is the explanation of each command above:

To enable 256 colors on the terminal:

Below is a logic I made for Vim to detect if the system supports a greater number of colors. Note that I made a conditional to detect if the terminal emulator is Apple's one. For some reason the colors behave differently in the versions I used.

If you don't use the Apple terminal, ignore that part and just add the code inside the else.

Don't ask me what these codes there mean. All I know is that a terminal with italic support will recognize them as italic.

Notice: If you already know a little about Vim and are not interested in NetRW, skip this part. 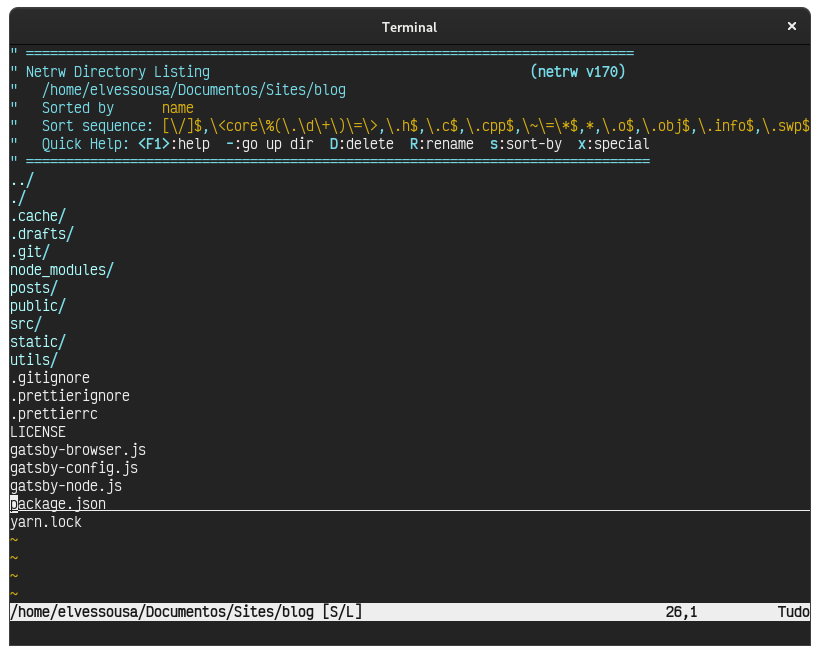 If you've ever used an IDE in your life, you might have noticed that there's always a tree on the side with the project files. Vim/Neovim use NetRW by default, which brings this same function.

When opening Vim or Neovim using the [n]vim . command to open the project directory, the file listing will appear inside it. It can also be opened using the :Ex ,:Vex or :Sex commands.

You can use it with the default settings, but personally, some things bother me, so I used the following settings:

This prevents NetRW from opening an empty screen just to create a file.

If you want to use NetRW, I believe this is the minimum needed to use it comfortably.

There are several criticisms of NetRW for the way it causes a buffer mess. From what I've researched, it seems that using g:netrw_liststyle=3 tree mode tends to make this behavior worse. Errors are random, making fixing it a difficult process, and updating only NetRW is more complex than it should be.

That's why there are several alternatives to NetRW, and the most famous one is NERDTree, which I use in my main configuration. 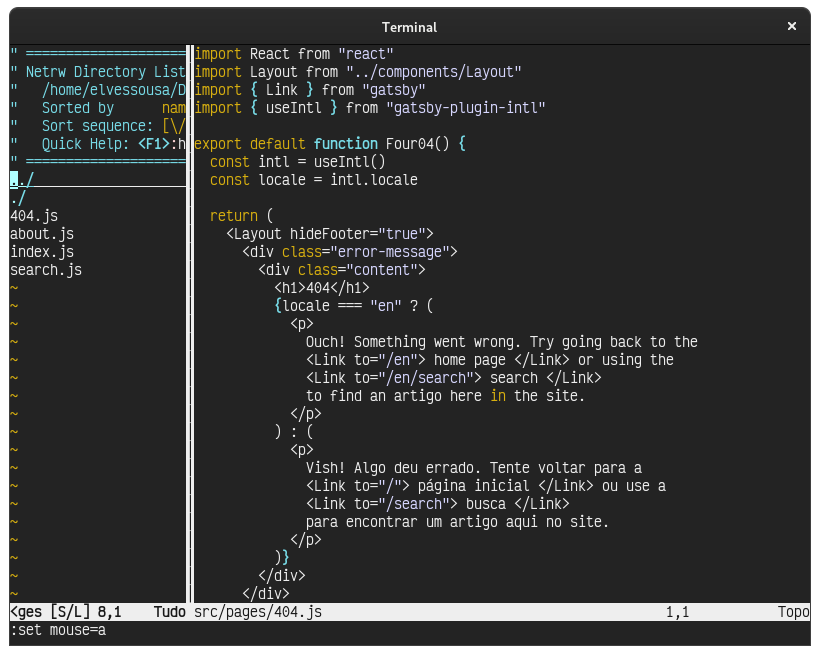 Neovim using the tweaks we made so far

Finally, it's time to configure the plugins. Unlike VS Code or other editors, there are several options for extension installers: Neobundle, Vundle, Vim-Plug, etc. Here I will use the last one, which seems to be the most used nowadays. To install it, open a terminal and run the following command:

These commands above do all the necessary to have Vim-Plug available in your editor.

Vim-Plug reads a part of your configuration file to find the extension in Github and install it in the editor. This part is delimited by the following structure:

You can add multiple extensions at once, just add multiple Plug as desired. There is a website that catalogs these plugins for easy discovery, if you want to visit. It's called Vim Awesome. The link is at the end of the article.

Here's what I use on my Vim/Neovim:

Writing these lines with addresses is not enough to install extensions. First, you must save the configuration file and restart Vim in order for the editor to comply with the newly added settings. After that, run the :PlugInstall command. 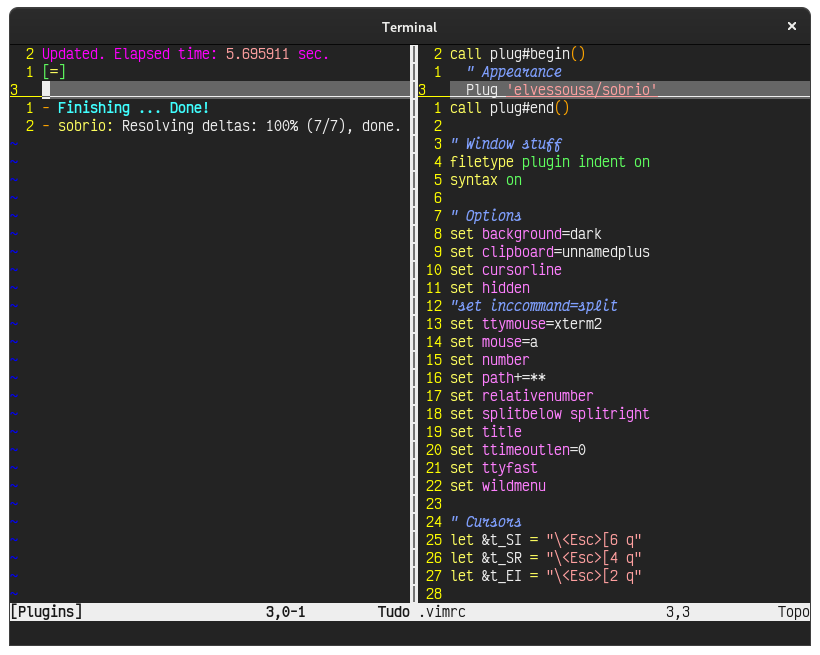 A window will open and show the installation process for each extension. After installation, you will have to restart Vim one more time to use the new extensions.

To uninstall, remove the line of the plugin you want to get rid of from the configuration file and after restarting the editor, run the command :PlugClean.

If there's something critical to a good development experience, it's a good color scheme. These are installed in the same way as extensions.

First, add the line with the path to the theme's Github repository:

To use the theme, add the command colorscheme gruvbox in the configuration file. This will be enough to get rid of that black screen and stark colors that come by default.

Color scheme I use 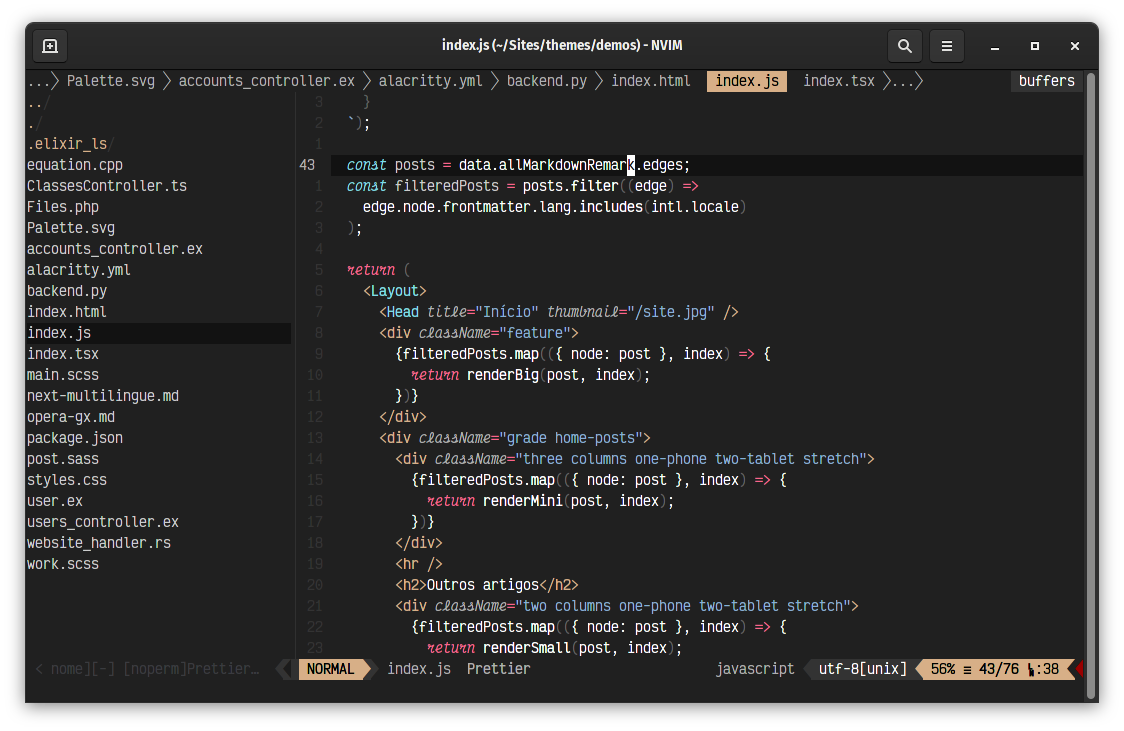 Sobrio: the theme I use in my daily life

Despite setting the example with the GruvBox theme, this is not the theme I use. Color schemes are very subjective things and as I used this theme, I ended up getting a little bored with it. The same happened with others. Since I couldn't find one I liked, I made my own. It's called Sobrio. If you want to test it, just follow the same recipe above, changing only the repository:

Then just add colorscheme sobrio and restart the editor. Please feel free to leave your comment and suggestion about it. I would like to know your opinion. If you want to know more about it, the link for the website is at the end of the article.

Devicons is an extension that adds icons to Vim's interface. In order to work, it is necessary to have fonts with icon support installed on the system.

Look for "NERD Fonts" on the internet, and you'll find plenty of them. The way to install fonts on the system varies a lot depending on the operating system, and I won't go into details here. Download it, install and apply the font for your terminal emulator. Other than that, no other configuration is required.

Little to set up here. Basically it's saying which theme to use and if you want to use "Powerline" mode, which are these lines with arrow shapes.

The last option above shows enables Airline for the tab bar.

NERDTree is the replacement for NetRW. By default, it works fine. I just added a line to show hidden files by default.

You know, I like to see .env or .gitignore files without having to type I first. 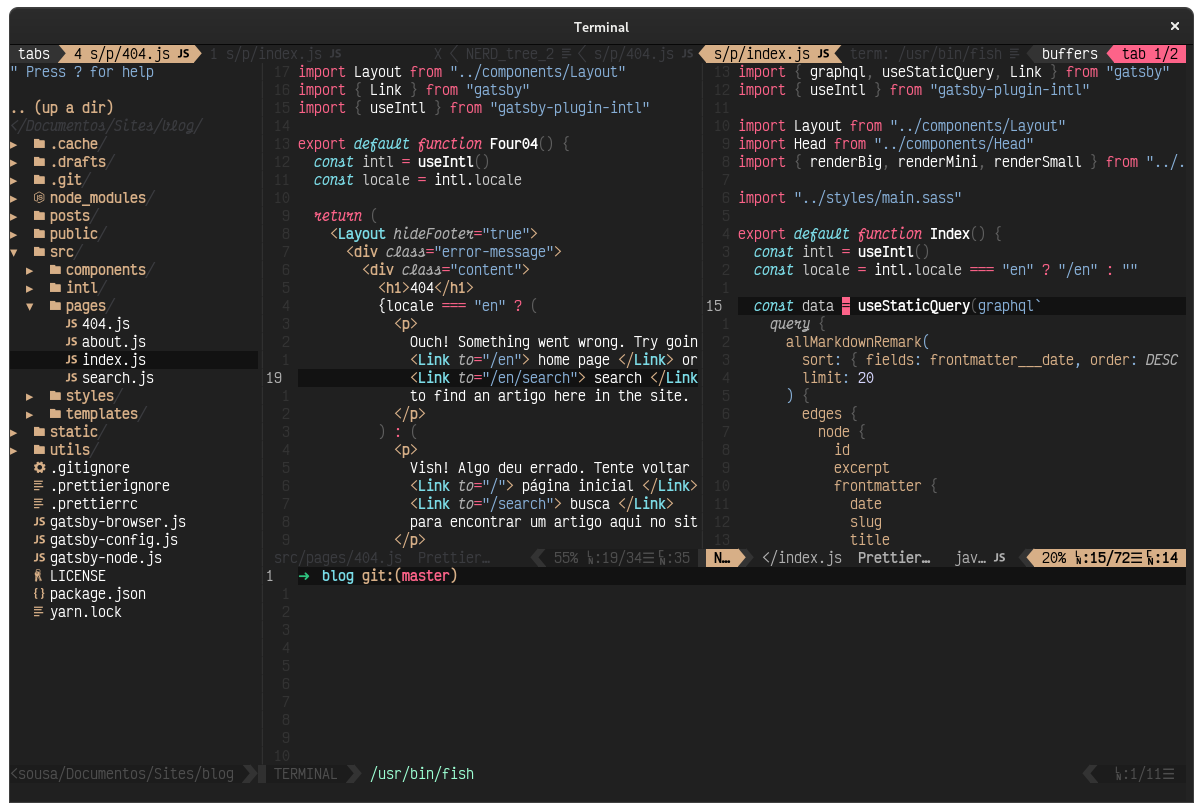 Neovim with the settings we applied until now

This plugin enables file search in your project's folder. It is activated by the same keyboard shortcut that gives its name. If you've ever used VS Code, you will get used to it very quickly. The only setting I made was this one:

Putting the line above into plain English: CTRLP will ignore every file or directory mentioned inside your project's .gitignore file.

If you don't use Markdown, skip this part.

As I use the Markdown format a lot to write on my blog, I installed this extension to improve the display of this type of file on my Neovim.

I use YAML headers (Frontmatter) at the top so that Gatsby does its magic. Without this plugin the frontmatter and code blocks syntax is not recognized.

This is the plugin that requires the most configuration. Conquer of Completion works as a server that provides auto-completion and code correction tools, working similar to VS Code. It supports extensions too, and these are responsible for adding support for the desired programming languages.

The weakness of CoC is that it is based on NodeJS, so the dependencies of installed packages will take up a certain amount of disk space, like all Node projects. Of the ones I've tested so far, it has met my expectations the most, with the least configuration.

Installing extensions is simple: just run the command :CocInstall <extension-name> and the features will be available for you to use.

Here are the extensions I use:

To install them all at once, just run the command:

The command above will run Prettier and format the file whenever you save the file. This helps a lot, as I spend less time pressing Tab to indent code.

Apart from the init.vim or .vimrc we've used so far, I also use a separate file called coc-settings.json. With it it is possible to modify the behavior of your extensions.

Here is the explanation of the settings above:

Note that if you don't use Python, just ignore the settings for it. For the Python formatter to work, it must be installed on the system:

As with other programs, there is a way to configure keyboard shortcuts. This can be done for each editor mode. The possibilities are many. To add a keyboard shortcut in Vim, just add the expression:

As I'm a bit minimalist, I didn't add many shortcuts.

Here is the explanation of the above mappings:

Note that there are several <CR>. These represent all the times you would have to press Enter in command mode. CR is the abbreviation for "Carriage Return": a term from the time when typewriters were used. Today, we understand it as the Enter or Return key.

All shortcuts I used are for normal mode, so nnoremap is on every line. If it was for insert mode it would be inoremap, vnoremap for visual mode and so on.

To automate some things, Vim makes it possible to define what it calls autocmd: automatic commands performed on certain events.

Above, I defined two actions: one to format the Python code when saving the file, and another to resolve an inconsistency I had with SCSS files.

Without a doubt, this was the longest article I've made so far, but if you followed the instructions, you have a very functional editor now. There are other plugins, but as you get used to it and build confidence, you will test out others better suitable for your needs.

Ideally, try to keep the init file simple. Too much extensions can affect performance. I use other settings that I haven't detailed in this article, as they are not important for most cases. I'm providing the link to my dotfiles repository for you to check at the end of this article if you want.

See you in the next article!

If this article helped you in some way, consider donating. This will help me to create more content like this!